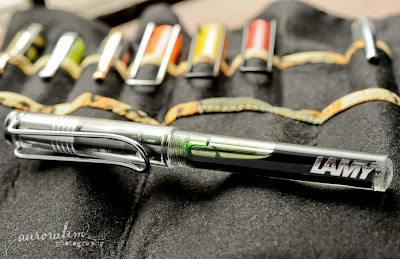 most fountain pen aficionados would know what would motivate a pen freak lover to experiment with something not natural to a pen engineered with a modern filling system and convert it to a primitive eyedropper-style pen. but for those wondering why, it is usually because of 3 simple reasons:

i first heard about converting the Lamy Vista demonstrator from my "suki" salesperson Rose at the National Bookstore closest to my place. she said all i needed was the Vista Rollerball barrel. for Php 475.00 (which is about US$11.00), i ordered one last December as a spare part. it arrived just last weekend.

since i am all in an excited bunch awaiting the arrival of the latest Lamy Safari limited edition 2012, it was welcome news to know that i can now stave off my longing for it by picking up my RB barrel and of course, a Lamy Vista and taking it to town. i also really, really wanted to use my Iroshizuku Chiku-rin alreadt. i was actually looking forward to the apple green 2012 Safari because it's a great match for it. but since, its not yet available in the Philippines, i might as well ink up the Vista with it. yey!

so i excitedly dropped by National last Saturday to pick up the barrel and the Vista that suki texted in. i even threw in a 1.1 italic nib knowing the Chiku-rin is on the light side of inks and looks best with a bigger nib. i actually tried it first on my apple green Prera with fine nib. it didn't work well because it was too light. as a nice surprise, suki Rose also gave me a Lamy notebook as a free item for my purchase. gotta love Rose! the notebook is a winner.

here's a video of how i did the simple conversion. i also had some fun trying out a stop-motion style video blog. so for that also, the Vista is well worth the price for the fun i had with it. and that is not to mention what a great, functional, workhorse of a pen the Lamy Vista is. most everybody probably know that, considering the long reputation Lamy Safaris (the Vista is a clear body variant of the Safari) have for many years already.

as for the Selley's Epoxy Fix, i think only time will be the best judge if this is a good adhesive to use for this purpose. initially though, it looks like a good match. i actually first thought i'd just use the regular silicone sealant. i went to Ace Hardware to get one but sitting right beside the sealants were the epoxies. i didn't know there was a clear epoxy so when i saw it -- and it was cheaper too being in a smaller tube, this one costs Php 89.75 -- i went ahead and inspected it. i almost didn't take it after reading that it was not recommended for polyethylene and polypropylene plastics but it was recommended for "many rigid plastics, glass, metal, ceramics and wood". the Lamy clear plastic barrel is what material???... i remember the colored Safaris are made of ABS plastic but i'm not sure about the clear Vista. Considering i would be possibly be ruining a P475.00 barrel that took 5 months to arrive, i hesitated a bit. the silicone sealant is a safer bet, i knew i stand a better chance of safely removing that adhesive without marring the clear finish if i make a mistake because silicone sealants are soft and flexible. however, i also don't like that it is flexible for this pen either. i'll probably play with it and eventually pull it off.  i also think there's a higher chance it will eventually stain from the ink.

so left with not much choice, i took home the Epoxy Fix. i love that it dries clear and rigid. it looks like it belongs with the pen and does not stand out. probably the only giveaway that it was put there is that on closer inspection, you will see tiny bubbles that hardened inside. but on the surface, it is clear and smooth.
another thing i'm enjoying on this pen is the 1.1 italic nib. it's my first italic nib, with a Lamy at least. my other nib(s) that is italic is on a Rotring Artpen Calligraphy set, which has a 1.1, a 1.5 and a 1.9mm. however, i don't really use it for everyday writing since the pen is long-ish, being calligraphy style. i'm not really a fan of broad nibs for everyday writing, my handwriting looks terrible with it because i write fairly small. but, this 1.1 italic is perfect for me, even as a regular writer. i can write fast with it and my handwriting looks decent enough. when my green 2012 Safari arrives, i will probably switch the nibs and the ink to match that pen and refill this Vista with another color.

but definitely, i shall be getting another 1.1 italic/stub one of these days. maybe i'll try a TWSBI 1.1 next. it should be on my (future) Vac700 or Mini. so, here's to looking forward!

here are a more shots beside a TWSBI 540 for comparison: 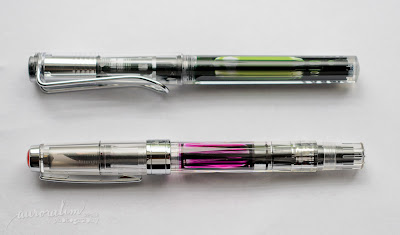 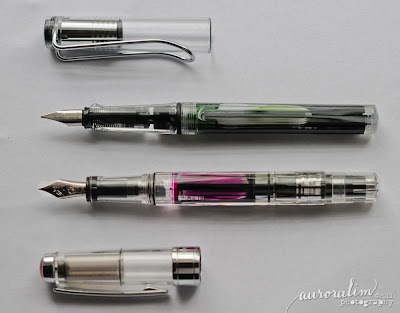 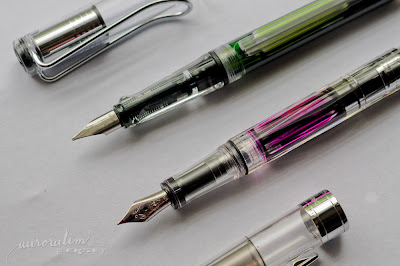