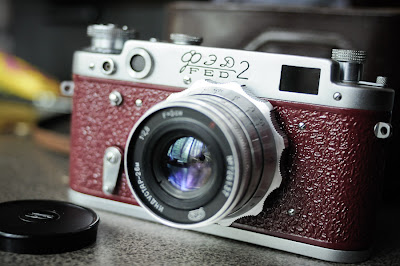 being as excited as i am now, i just had to blog about this the soonest. see, for quite some time now, i wanted to get me a rangefinder camera. i even went and joined an online forum called rangefinderfilipinas.com some years back to learn more about these cameras although i wasn't exactly an active member. (in most of the forums i am on, i am mostly a lurker anyway.) being the constantly distracted creature that i am, it's been years since then but i still haven't got around to getting one... till now.

it was several weeks ago when it just occurred to me to look in again on that sinful, tempting website called eBay, and i came upon this red Fed 2. the color caught my attention first. then, i looked closer and saw that the lens attached to it had a really cool-looking flanged focusing ring, and it wasn't black. (the lens is an Industar 26m.) i pooled some opinions from the RF group - who recently went on Facebook, hence was more accessible to me - and asked them what rangefinder was good for starters. a few guys recommended a Fed 2. perfect.

long story short, i hit the Buy It Now button and set down for the wait. the rangefinder was shipping from Ukraine which was closer to me than the US so i thought it might come in sooner, but it did not. but hey, it finally arrived yesterday! and goshdarnit!... it looked even better than the seller's photos! heck, it was love at first sight! isn't that camera just, oh so, vintage sexy? or is it just me? 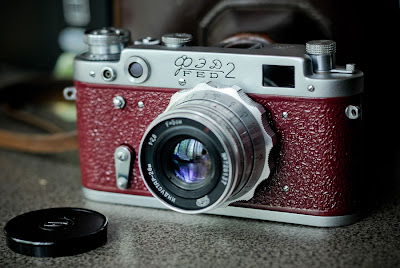 a member from the RF forum, Martin, called that beautiful color oxblood red (which incidentally is a bakelite finish according to him). a girlfriend who also thinks it is lovely called color, wine... i thought it is an interesting example of how men and women...uhmm... grasp things :-) 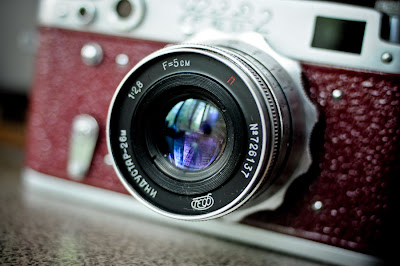 please pardon the dust, but i got too excited. 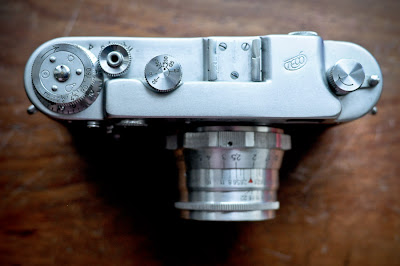 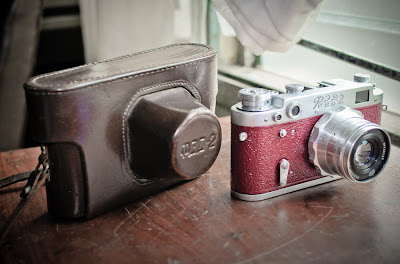 it even comes with the leather case which was, well, a tad bit smelly, but i can live with it. just probably needs some airing. it's still a plus for me. 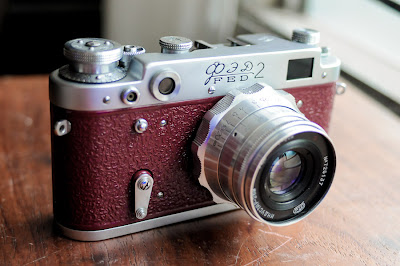 i've loaded it up with Neopan 400, a black and white film, just to test how everything works with the camera and that there are no problems with it. it also gives me good reason to try my hand again at developing film, something i have not had practice with since the photography classes i took a couple of years ago. hopefully i won't mess that up. will post on how that goes next.